The first of many side bets for The Match between Tiger Woods and Phil Mickelson on Friday is on the board.

During Tuesday afternoon’s press conference in Las Vegas, Lefty bet Tiger $100,000 that he would birdie the first hole at Shadow Creek. Not surprisingly, Tiger raised the stakes by challenging Phil to double the bet. Phil responded to Tiger’s challenge and obliged.

But Tiger did not let Phil’s side bet go unchallenged without taking a few shots at his confidence. After Mickelson reiterated his assurance that he would birdie the first tee on Friday afternoon, Tiger simply said “Double it.”

After Tiger’s challenge, Phil poked fun at Tiger’s competitiveness by saying “Did you see how I baited him like that?” to the response of laughter from the crowd.

Phil then agreed to the increase wager before he and Tiger then went back and forth over how the hole would unfold for Mickelson. While Phil expressed ultra-confidence that he will make birdie to open play on Friday, Tiger showed nothing short of absolute doubt that Phil could follow through. 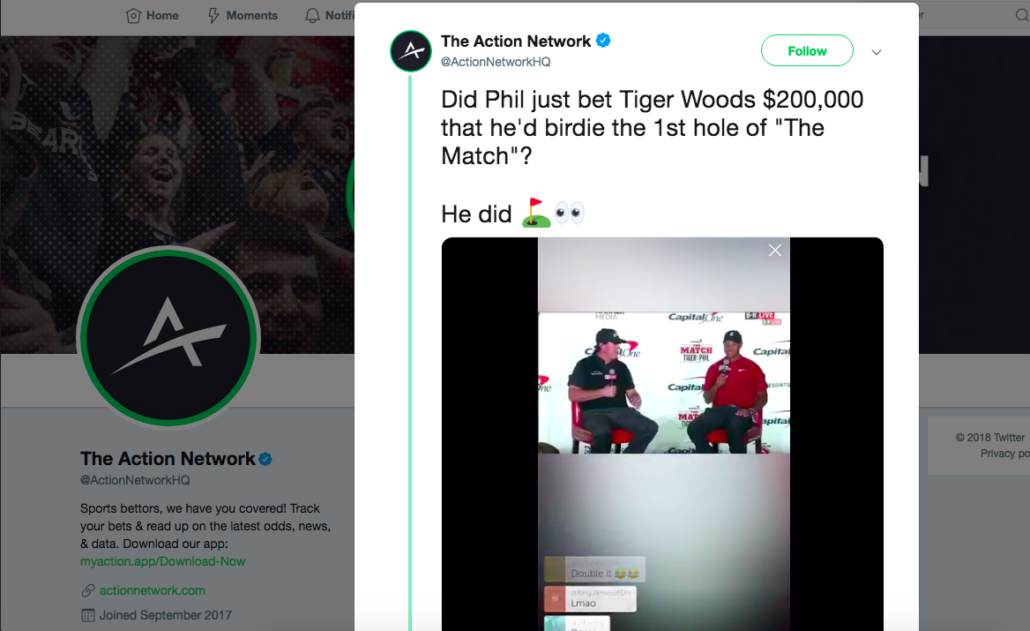 Side bets have been expected to play a large role in The Match. Fans first found out about the potential side bets last month when Phil teased the idea during an interview with TNT on one of their NBA games.

“We’re going to have little challenges that can maybe get in each other’s heads,” Mickelson said. “You have a downhill putt? I’ll bet you 50Gs that you miss it.”

“During the live event competition, both Woods and Mickelson will selectively make side challenges against one another,” Turner Sports said in a statement last month. For instance, Woods or Mickelson could raise the stakes by challenging the other to a long-drive, closest-to-the-pin or similar competition during a hole as they play their match, with money being donated to the winning golfer’s charity of choice.”

Well, the first of many side bets has been set. The gambling fun is just getting started for Tiger v. Phil.